Winter in Ladros: Report on a First Age Campaign

In Other Hands 1, I wrote a lengthy article on how to set a Middle-earth campaign in times other than the Third Age. I will here proceed on that matter by describing a First Age campaign which was run in my gaming group during the spring of 1993.

The adventures of a Beleriand campaign must necessarily be fairly unsophisticated, since the region lacks both cities and a complex or developed society. The political situation is also fairly simple, with a clear set of enemies and only a limited bickering among the Free Peoples. Altogether, we played eight adventures in this installment of the campaign. The gamemasters,1 being content with their creation, have decided to resume play in early 1994, at which point the characters will be drawn into the dramatic events of the Dagor Bragollach, hopefully surviving by fleeing south across Dorthonion.

The campaign took place in or near a small Edain village in Ladros on the edge of Ardgalen in the winter of YS 454.2 The main sources used in its design were The Silmarillion and Fonstad’s Atlas of Middle-earth (the latter providing much useful climatic and geological data). The player-characters were mostly hunters and artisans from that settlement, though one of them had served as a tracker at Angrod’s castle for many years. These characters were modeled on our Viking ancestors, albeit endowed with a more heroic set of skills. In the course of the first scenarios, there also appeared three Elven player-characters: a Noldo warrior of Maedhros’ host’ (a courier carrying a message from Maedhros to Aegnor), a Sinda warrior searching for his lost brother,4 and one Laiquendi hunter from Ossiriand who, in a dream, had received a strange message (purportedly from Oromë) summoning him to go north to slay ​“the Black Tiger” — whatever that might be.

The campaign was divided into two parts. The first consisted of a series of adventures relating to the village. Wolves (with a Mannish or Elven leader) and Orcs were spotted in the neighborhood, and we spent much time trying to investigate their movements and possible intentions. One night, the village was attacked by a superior number of Orcs and wolves and there was a grand battle in the moonlight — to our surprise, only the wealthiest man of the village was abducted in the raid, and with great losses for the attackers.5

We decided to track his captors in order to find out what was going on. This pursuit led us out across Ardgalen in a way reminiscent of the Three Hunters’ quest of The Two Towers. We discovered a fortress built some hundred miles southeast of Angband and commanded by some-one judged to be Sauron. Before we could investigate closer, however, we were discovered by Orcs and had to flee homewards, pursued by a wolf pack with a human-looking master. Eventu-ally, we were overtaken by the pursuers and there was a grand melee, in which our Noldo warrior slew the Wolfmaster, who turned out to be the Sinda’s lost brother.6

The second part of the campaign began on the way back to the village, during which time we discovered three mounted Noldor of Aegnor’s household that had been slain by some big and hideous fell beast (We immediately assumed that this must be the Black Tiger.). One of the corpses had a beautiful and very magical battle-axe that eminently suited the Laiquendi character.

We decided to travel to Aegnor’s castle to inform him of the event. That journey turned out to be unexpectedly strenuous, since we were harassed by a swarm of Orcs led by a sorcerer. Obviously, he did not want us to reach our destination and was ready to spend the lives of his minions quite liberally to that end. Since the sorcerer could pinpoint our location through his fell arts, we finally dug in on a hilltop and staved off an attack by fifty Orcs, suffering only wounds while slaying around thirty foes and driving off the rest. 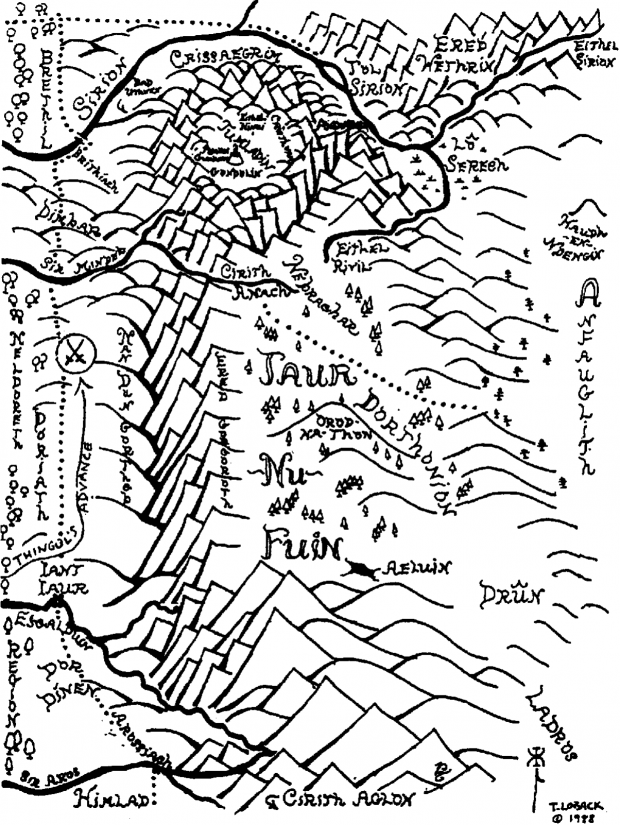 Map of the Campaign 

We snuck away at the first opportunity and made for a nearby Elvish fort, manned by fifty warriors, where we waited for an expected night attack. Some three hundred Orcs and one fell lynx-beast (the ​“Black Tiger”), led by the sorcerer, struck some hours before dawn. Again there was a grandiose battle during which much Orkish blood was shed. When dawn came, there were only a handful of defenders alive (including the player-characters), but everyone was very badly wounded. The sorcerer and his lynx-beast (killed by the magical axe) and about half his Orcs were dead, and the rest retreated in reasonable order when they heard the horns of Aegnor and his household knights coming to our rescue.

This brief summary does not entirely capture the mood of the campaign. We aimed to recreate the spirit of The Silmarillion, in which the Free Peoples fight a desperate and never-ending battle against the hordes of Evil, knowing that all their struggle may be futile, but yet not yielding.7 The gamemasters and the players used a laconic style of speech and displayed much spectacular heroism to achieve this ambition (and for me it was a success — our last stand in the Elven fort actually reminded me of Leonidas and his Spartans fighting the Persians at Thermopylae).

To summarize my experiences of the campaign: Beleriand is a milieu eminently suitable for those that enjoy heroic fighting and wilderness adventures, but providing little opportunity for a more intellectual approach to gaming. The social environment is too primitive for complex political and criminal plots. On the other hand, considering the extraordinary abilities of the Beleriand figures described by J.R.R. Tolkien (e.g., Túrin and Huor), players can design awesome characters, far beyond what is suitable in a Third Age campaign.

There is ample room for excitement: the player-characters are usually fewer and better than their opponents, but must avoid being swamped by the superior numbers of a foe who does not care much about losing Orcs on the battlefield. There are other servants of Melkor who are far more awesome than any player

character (Remember that Balrogs appear in company formations at the Fall of Gondolin, and that Sauron himself walks the meadows of northern Beleriand in search of Morgoth’s mightiest adversaries.).

Beleriand is famous for its quests. Even though players cannot repeat Beren and Lúthien’s capture of a Silmaril, the gamemaster can easily invent similar but less awesome tasks for them, sending them to distant corners of Beleriand or even to the unknown lands east of the Blue Mountains. Considering the extreme level of violence in Beleriand at the end of the First Age, it is likely that a player-character group will suffer numerous casualties before completing their quest (Remember that even Beren fell before Carcharoth.). But, dying heroically, with a stoic and laconic last word to one’s friends, should in itself be a notable accomplishment in the campaign context.

It is questionable whether Beleriand provides enough varied scenario opportunities for a very long campaign. My impression is that it ought to be better for the gamemaster to concentrate efforts on five to ten adventures, leading the players to a spectacular climax. Thereafter, the characters should retire, satisfied with their accomplishments in the fight against Morgoth.