This adventure is set in Rhudaur and/​or Cardolan in the year 1643 of the Third Age. It involves the finding and recovery of four magical weapons which had belonged to King Calimendil of Cardolan and his lieutenants (some of whom perished in the wilderness of Rhudaur in 1235). The search for these weapons may eventually lead characters to follow the trail of one of Calimendil’s lieutenants into the lair of a lost tribe of degenerate Dwarves, who may or may not be cooperative in helping the characters to obtain what they have come for.

In T.A. 1235, Cameth Brin was besieged by Cardolan. At the very moment of victory the Orc armies surprised the armies of Cardolan turning it into a rout. A huge section of the royalty and army died that day. Unbeknown to most was that several groups of extremely loyal and able men took the body of the King away from Cameth Brin. These groups were hunted down by Orcs and Wargs. The groups consisted of Tardor plus 15 pikemen; Saral plus 24 mixed soldiers, bearing with them the King’s body, and Ilan plus 10 mixed soldiers.

Each group of lieutenants went in a different direction. As Saral went along the Mitheithel River his company was attacked, losing the King’s sword and several soldiers, and the group was eventually surrounded and killed. Tardor went via Rivendell and was attacked in En Egladil near a river. Ilan’s group made it most of the way home but was attacked and killed to a man by a marauding band of Trolls and Orcs. Tardor did not survive, and his group was leaderless, panicked and confused. (Note: the exact locations for all of these events may be chosen according to the GM’s preference).

The survivors of Tardor’s group found a cave entrance during a great storm and inside stumbled upon a tribe of Petty-dwarves. They fought their way through and down the Dwarven tunnels to the next level which the Petty-dwarves had just started to explore. During the next days the Petty-dwarves made several forays down to ​“deal” with the problem but each time were repulsed. They eventually closed the connecting tunnel with the large doors hoping to starve them out. The only food the soldiers could find were glowing fungi. After years of eating these they were slowly transformed into strange undead beings.

Tardor, Saral and Ilan were all right-hand men of King Calimendil, brave and mighty lieutenants. Mighty as they were, some of their fighting prowess was from the bonded magic weapons that Calimendil gave them. These were four weapons: a sword, hammer, bow and spear. Individually the powers were quite small but when activated and joined they were mighty indeed.

To fully utilize their powers they must be touched together. Their powers go up by the number of weapons touched. Thus if three were touched then they would all be +15 and able to cast up to 3rd level the spells from their corresponding spell list. They would still only be able to cast any spell once from the list per day. The weapons, their elements and wielders are as follows:

When initially found, the sword appears to be old and rusty. A successful Use Items partially activates it, surrounding it with a magical aura as though new. A very good Use Items roll would give hints as to how it could be activated (raw elements, all the heat being sucked from the immediate area etc). Each weapon is attracted to the others when inactive. The weapon will either gently tug in the direction or possess the current holder and make them run towards the next weapon. Activating the weapons might become an adventure in itself (through the breath of a fire dragon, magical fire, wind, and so on; be creative).

If the holder of the sword is Dúnadan, you could introduce some very good political maneuvering in Cardolan. Push him/​her as the reborn King/​Queen, etc. Ardagor could also be brought in as a possible threat, as he is doing some major horse-trading around T.A. 1643. The holder of the weapon will also experience dreams derived from the original wielder’s past, all of which may give hints/​clues to the weapon and its origin:

The site of the Petty-dwarf caves

This section of river flows reasonably slowly. It is surrounded by low shrubs on both sides with the southern side having clusters of trees. The shrubs come right up to the bank of the river. Near the sand bank a Kraken has found an underwater cave which has made for a very convenient home; the cave, however, is also a entrance/​exit to the lower level of the Petty-dwarf lair.

The Kraken stays here during the day and patrols the area looking for food and guarding it’s territory during the night. The sand bank is quite solid but if a character stays still they will slowly sink. The Kraken has collected treasure of: 40sp, 2 Tiaras with glass gems (10gp) and a Shield (40% of the normal weight). Stastics for the Kraken are listed in the table on p. 29.

Some 90’ from the northern bank is a large mound (50’ high) that dominates the skyline. It is covered with grass and small shrubs. On the northern end what appears to be a mud slide can be discerned. If they examine the area they may find a broken sword (30%) or human bones (20%). It would take 50 rounds to clear a way enough rubble to gain access to the tunnel leading down. If a long pole or the like is pushed through they will notice that after 5’ it gets very easy to push through. On the north side of the mound is a grassy plain extending some 1.5 miles in all directions.

The initial reaction to the party will be one of violence, but when Marat arrives (some three rounds after the alarm has been raised) he will proclaim them to be gods from the Upper Heaven, and all courtesies will be offered. Language will be a problem, but the Dwarves will attempt to use some form of sign-language to get ideas across.

Thortan is making a ​“play” for the leadership of the Petty-dwarves and will be intensely wary of the party. He will try to poison them or otherwise disprove their godhood, eventually persuading Hooton to compel the characters to prove their divine identity by destroying the ​“dark gods,” which are actually the entombed remnants of the rout at Cameth Brin who, as a result of eating the fungi in the caves, have been slowly turned into living fungi, burning with the need to protect their now long-dead commander.

If friendships are made and deals struck between them, Hooton or Marat will ask the characters to contact other Petty-dwarf tribes. Vague maps will be drawn showing a long fell and lake in the Ettenmoors above Rivendell (cf. ​“King’s Horn” adventure in 1st edition boxed MERP rules). If the party knows that the Petty-dwarves are no longer there and offers to find these others, Elrond may know of such groups and will offer information of their whereabouts. Getting to Rivendell may become an adventure in its own right.

If the parry presents Hooton with any unwanted magic items, then he will give them gems in addition to one or both of their own items (the scroll and/​or brooch), or gems and herbs.

The physical appearance of Petty-dwarves is very similar to normal Dwarves but they are smaller and hairier, with much better eyesight in the dark. The effects of inbreeding are starting to show with some being deformed or mentally challenged. The worst cases are killed and used to feed the fungi plantations, as are any of their number who die.

The Petty-dwarf leaders are: Hooton, tribal elder (8th fighter), Marat, tribal priest (7th), Thortan, warrior leader (6th). Hooton and Marat are the power brokers here, but Thortan wishes to move out this ​“older” generation in order to get new blood into power. Hooton is slightly retarded and is 170 years old. He tries to be wise like his father but only sometimes manages it. He has begun to stoop and has jet black hair like all of his tribe. Marat is 184 years old but acts and moves like he is only 130. Thortan has ​“hit” middle age (about 110). He is fat for a Petty-dwarf and likes to boss everyone around. They all have a gnarled limbs, thin heads and wispy beards giving an ugly appearance. Stasticsfor the Petty-dwarves are listed in the table on p. 29.

All the walls are roughly hewn but the Petty-dwarves have been here for 300 – 500 years so they have tried to make it as comfortable as possible. There is dim light throughout this level, as bright lights blind them for twice the normal length. All their weapons and items are non-magical but due to their manufacture and materials are +5. Unfortunately, these lose their bonus after prolonged exposure to sunlight.

The fate of Calimendil and his men

Now undead, the ill-fated men have become divided into four different groups (see ​“The Lower Caves”). The group that inhabits #5 – 9 are translucent water ghouls controlled by a semi-sentient slime in #7. They are resistant to fire-based attacks (1÷2 damage) but take double damage from liquid-destroying attacks. They are also very hard (-20) to see before they attack and thus usually get surprise.

The group in #10 – 14 are bluish in color as they ate the fungi in #11. They are mould skeletons and exude such a foul smell that all within a 15 radius must save vs 5th level fear or attack at –20 for the duration of the battle. All their weapons and armor are shiny and new, kept clean by the mould.

Note: Skeletons are unaffected by bleeding, and all Slash crits become Crush crits.

The group in #15 – 19 are all greater skeletons guarding the tomb of Tardor in #17. These are the most human-looking of all, the fungi responding to the hosts’ need. They are also the most intelligent, having defensive and offensive strategies. If a holder of another bonded weapon makes themselves known and proclaims himself to be one of Ilan, Saral or Calimendil or even from the ​“new” King sent to reclaim the body of Tardor, they will obey him/​her.

The group in #22 – 27 all became insane when transformed. They gibber and drool constantly and have taken on nightmarish appearances. They fight without rhyme or reason and will attack each other (25%) if they get within 10.’

Stastics for the creatures are listed in the table on p. 29.

After one hour of being in this level all characters (except Dwarves) must save vs a 5th level fear attack or suffer claustrophobia (all actions at –20 for the duration and unable to make rational/​intelligent decisions). Because of the glowing fungi there is sufficient light Elves or Dwarves to see clearly, but others will need artificial light.

The area is dank, and water continually drips from the ceiling in most places. The air has a sweet smell to it. The tunnels were formed by an old underground river system which has long since dried up. Most of the fungi here would be worth money to a Sage/​Herbalist as all have interesting properties (perhaps 200 — 400gp for a sample of each kind). But care must be taken in storage, with no sunlight and little moisture. 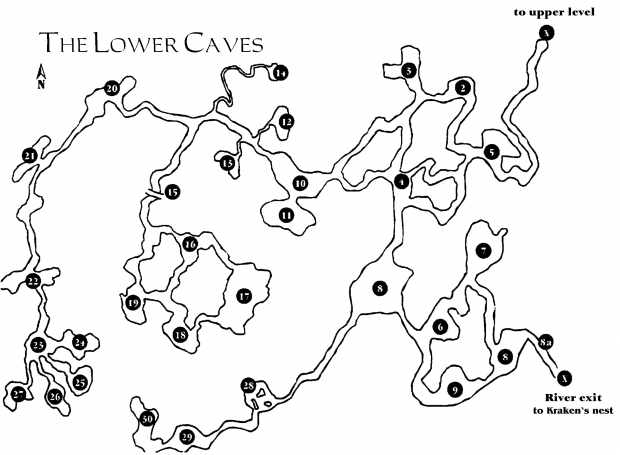